The largest of the Ionians, in western Greece, this island was devastated by an earthquake in 1953. Everything was flattened except one port in the north, Fiskardi.  So it’s not surprising th 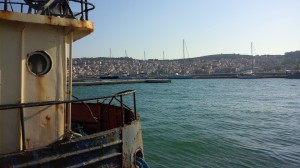 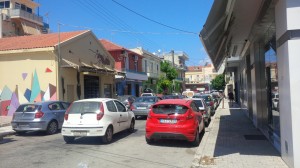 at Argostoli  has a modern, re-built feel to it. Half close your eyes and the town merges into shades of ochre and pale cream, with hot orange clay tiled roofs as it steps up towards the pinewoods.  Streets are parallel to the quay, which rose up half a metre in the quake, now some are pedestrianised with slippery stone, lined with clothes shops, and opening into squares. In one, for example, was an open air bouzouki evening – the hypnotic rhythms of the opium dens in Piraeus.

We had so many repairs to do that we were too tired for Greek night life, and rather than the clothes shops our wild gas hunts took priority.  It was a week before we got the two bottles we needed, some strange new make called Eco gas. It worked fine and although cooking on board resumed we became regulars at the waterfront restaurant, watching the 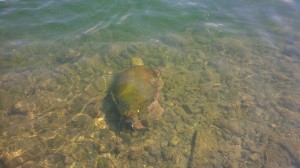 loggerhead turtles waving their flippers. Parrot said this is their mating sign, prior to going to lay eggs south of here.

Water, gas, and emptying the holding tank took priority for a few days along with half a dozen things to mend. Jamie sailed Shearwater here from Sicily with Louisa last ‘month.  Not a bad achievement for our 25 and 27 year old. They did night passages, and endured the need to shorten sail, reefing during storms.

We chose the harbour across the bay where he left her, and in the afternoon of our arrival were delighted to be on our trusty boat. The harbour is free, being unfinished these past 12 years with no power or water. The previous month Jamie was quoted 200 euros to look after her by Leonardo. We decided not to , though since arrival have seen the occasional  ‘visit”.  She was tied up with double ropes, and covered in a fine dust. A visit to the quayside anchoring stern to, sorted us a good wash down for 2 euros 50c, and a shrug of the shoulder from the man with the satchel established that there is no pump out from the holding tank. Not that we minded, but the paperwork for this country makes them sound very strict. We had even brought a special adapter.

In the mid-week we were joined by two friends and our journeys with them would have started but for the ferocious winds from the north.  White spume raced over the long inlet here breaking 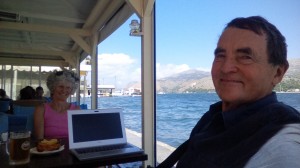 over the harbour wall. Some days later we were still listening to screaming sounds from the rigging.  Sometimes we heard the snatches of the church bells over the water. Nearby we heard the goat bells tinkling as a herd came along the undeveloped harbour edge. Out to sea we went, only to turn back after bashing into large waves. Not too large for Shearwater, but we did not want this holiday to be hard work, holding on tight, watching the walls of green sea get taller and taller. On returning to our free harbour with about 10 other yachts we tried anchoring outside, but after a swim the wind got up and we quickly went in to the safety, again with double ropes.

Greece has been in t 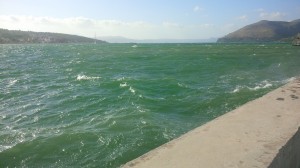 he financial news a lot since the country had to borrow vast amount from the IMF in order to keep going. We read new phrases in the beginning, such as when the bankers were to “take a haircut”.  Yet the town of Argostoli is bustling, and busy making money from the tourist trade. This month the papers say that Greece has achieved an economic growth of 1{2d6aa637a6e5275e985cb922686f04737151be25fa2b1e4e9fdc2413d33d685d}, which is more than France where yet again there are lots of strikes this summer. The port receives Swedish building timber, and exports olives, wine, and limestone.  After the earthquake in 1953 the island population of 125,000 left so those who were l 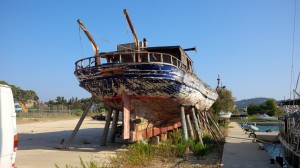 eft went down to 25,000 in total. People from poorer islands came in to make up the numbers – and the re-building of a whole large town has been achieved.

Wine can be bought here for 3 euros, but we tried out the local speciality white wine from the Roboli grape, light and lemony. More of this when we find our peaceful sheltered clear water anchorage that we had been expecting.