Catania is a dark city. Dark rocks of  basalt form the road paving. The walls above the black basalt base courses are of dark render, made from the same aggregates. It is laid out in very long straight streets, as if some alien imprinted straight lines on the devastation after the earthquake of 1693. In today’s language it had a magnitude of 7.4, the greatest in Italian history. Over 60,000 people died and two thirds of the people in Catania were killed.  So the streets we see now are not like a roman grid of the centre of a smaller town, they are lines drawn through the rubble and chaos of a deva

stated city from one side completely to the other. That is why it feels alien.

In England we are no strangers to dark cities, for a different reason. As a teenager I visited towns “ oop north”.  While being interviewed for university I had to go to Leeds. Many English people think of the north as being full of “dark satanic mills”. It’s not just the dark stone, it is the pollution of coal fired chimneys that colours the world there.

But in spite of being “dark”, Catania has stunning Baroque churches and a lighter coloured square at the intersection of these strange roads.  The lighter ston 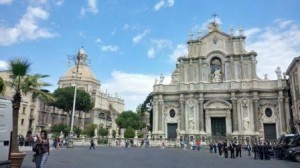 e comes from Siracusa. Cascades of baroque details tumble down the facades. In one street we counted three large domed churches almost touching each other, their own saint making each one different from the next.  In the main square with the elephant statue in the centre ( the symbol of the city),  the space seemed so large that nobody got round to designing what it is for. It feels like an unfinished piece of townscape. About forty police of the various divisions, with many cars and vans, stood around, all carrying guns. A jovial carabinieri officer in one group said it is for the the display.

There were quite a lot of  migrant men sitting about in the duomo compound until it was locked up. All the churches here seem to have domes, and inside the columns are immense squares – chosen to be more earthquake resistant than last time.

The highlight of Catania is the huge and frenetic fish market. Said to be the best in Sicily, there is a lively shouting atmosphere. Swordfish and a huge variety of fish of all kinds are strewn amongst the ice and stainless counters. We bought vongole to eat on the boat. 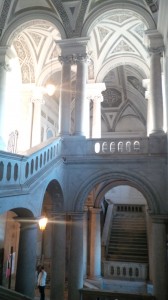 Up the hill, a long straight road again, we pushed at the doors of the Monastero dei Benedettini. Exploring the staircase of vast baroque scale, we realised that it has been converted into the university humanities departments. Solitary quiet students with their laptops were scattered throughout the huge complex of squares. Flying modern landings have been inserted with light steelwork.     Guided tours are the correct way to see this place, but after my years in Liverpool I was trained in the art of getting into places without paying. Keep walking and look as if you have permission.

For the next day rather strong wind and waves was forecast, and we went out into the bay near the harbour intending to anchor for the afternoon. The large waves from the east were too much for comfort, so we returned to the city to explore ice cream bars. One result of promising to pick up crew as we did here, is that we tend to get to where they expect us a few days early. And so we felt pleased to leave the port at the end of the week, motor sailing most of the day down to Siracusa in the remains of the lessening wind and swell.