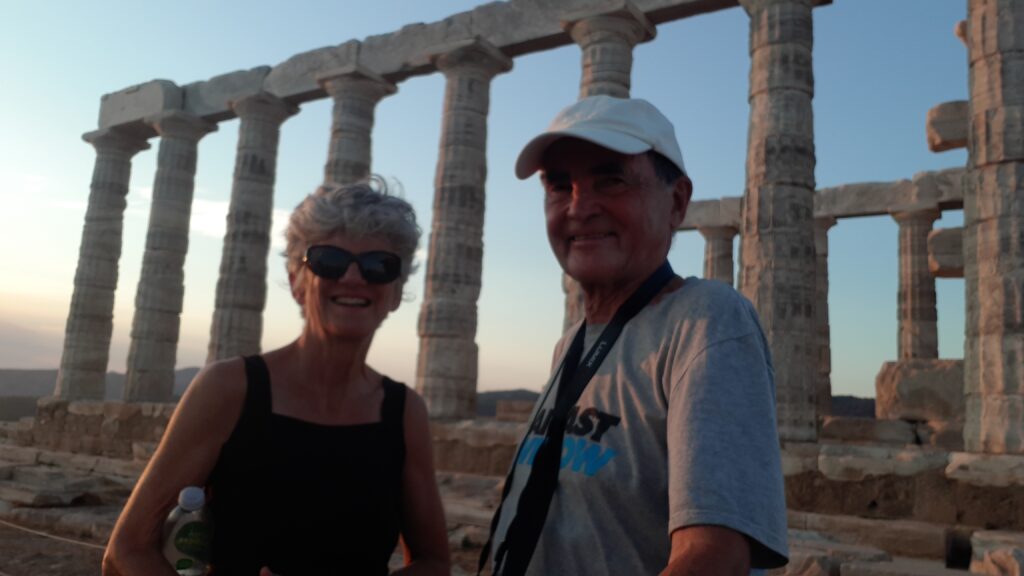 Our half day passage motoring south to Cape Sounion a few days later in August was in a glittering calm sea, as forecast. This benign intervention by Poseidon allowed us to anchor in a shallow bay below the cliff some 65m high. It was crowded with dozens of yachts by the late afternoon, but we had been early enough to pick of where to go, choosing to be in 7m depth, in which we gave out 45m of chain. The bay is rather open, but there was no swell when we climbed up a rocky path to the pale marble columns of the temple of Poseidon, where a crowd was watching the flaming orange sunset. In the distance was the coast of the Peloponnese, our destination. This is surely one of the finest backdrops for any temple in Greece. (They used this one on the holiday posters.) Sarah spotted a rock Partridge using her phone app which identified the call. Mmm, Partridge, eh, can we eat them? 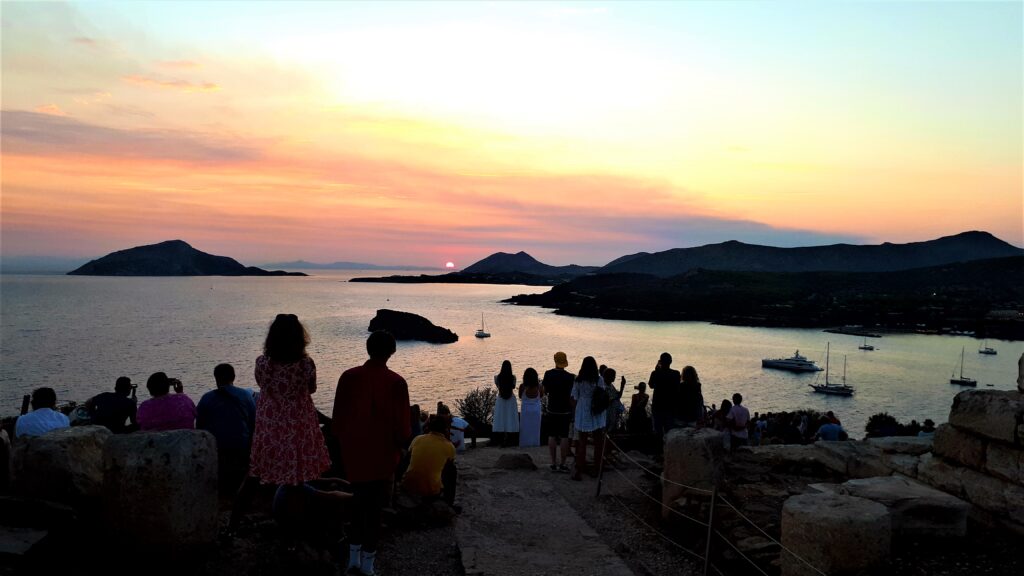 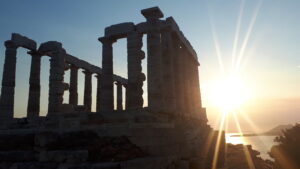 Meanwhile as the Swifts were zooming about overhead I checked the slender Doric columns. Only 16 flutes, not the usual 20. Actually it’s a unique number, and I have not seen a convincing reason why. It was built in 444BC, in marble from nearby Agrilesia, the same year as the Parthenon. Perhaps the architect was Iktinos, at that time busy on the temple of Hephaistos in Athens Ancient Agora, some 70 miles away. So maybe he did not get to site often enough, such as when the first column was fluted. They were done in place after all the parts were stacked up. I imagined myself in his shoes, saying, “Oh dear, you got the number of flutes wrong…”  The contractor possibly replied, “We’ll have to carry on now and make them all the same as I’m not taking that first one down.” Parrot would’ve said, “Welcome to David’s world of work, Iktinos.” 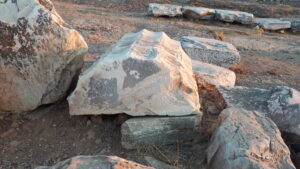 Something like this must have happened when they built the series of the Moody 346 yachts in Plymouth, “Oh dear, the yacht leans to port now we got it in the water.” And then they said, “We’ll have to carry on now and do them all the same, not changing the design now.”

We scrambled down in the dark and the path took us to our beached dinghy, tubby mc tubface.  ( Parrot chose the name ). It was very hard to get onto the yacht. The swell had built into white surf breaking around Shearwater and she tried to thump the stern down onto our dinghy. But we were in 7m of depth and this was not supposed to happen. Some yachts motored out in the dark.  I thought of King Aegis then.  He was stricken with grief throwing himself off this very same cliff and drowned, according to the legend. Thinking wrongly that his son Theseus was dead  –  the homecoming galley had caused this misunderstanding as it approached with the wrong coloured sail. That is why the sea is called the Aegean.

A bright calm day meant we motored from there to Dokos Island in order to continue our westward journey. Sounion’s temple stood out in the sun just like the posters, a landmark to sailors heading up to Athens for some 2,500 years. We don’t agree with Byron writing that to see it at sunrise is best. And he’s in my bad books for carving his name on a column.

To the north, was the low lying island of Salamis, the scene of the most important classical sea battle in the western world. In 480 BC the Greek navy of oared boats with huge bronze rams took on the mighty Persians and overcame the larger fleet. Xerxes watched his defeat from a golden throne on the mainland, and had to retreat, finally leaving the Athenians alone. It was a clever victory based on secret tricks and…..if you give me a napkin I will draw it for you.

Shearwater needed to motor because of the reduced winds and rounding into a sheltered bay on Dokos we anchored with a line ashore. It was rather deep further out, so we settled for 50m of chain in 8m depth. We need not have worried as it was a calm night, although there must have been over fifty yachts and fat catamarans all also trying to keep in the shallow edges. Dokos was pretty, with deserted slopes of rugged scenery but not a place to keep the interest of some people. After swimming and enjoying the calm, most yachts carried on with their journey, as we also did.

We left at sunrise, knowing that our next small harbour would probably be crowded in the afternoon. A check on the fuel told us we had about one eighth of a tank left, about 12 hours motoring. We’d had the original rusty tank replaced with a stainless one the first year we got Shearwater. In the side we specified a big access plate in order to clean it in case we ever got infected with the diesel bug which can grow between the water and the fuel. (it stops the engine by clogging up the injectors ).So as the tank becomes nearly empty there are thoughts about what kind of grunge is now swilling round the bottom eighth of the tank…? We always put fuel additives in when re-fuelling and have two filters in line. We have been lucky so far.

These thoughts did not spoil our long  day motoring in flat sea to Leonidhion where we expected that there would be…fuel. Reflecting on why the autopilot would not work the previous day I had a Eureka moment. Idiot…I had put the little electric motor and drive band below the steering on backwards. Bungalow Bill, as we call the autopilot, was then not trying to turn us round, and took charge of  Shearwater as we motored across the gulf at a steady six knots. A ruler straight wake behind us stretched out for miles. The Raymarine we use is a mixture of parts from the original fitting out, to which I added a new control panel. Its called Bungalow Bill because when it stopped working I phoned the number on the page of parts that came with the yacht. I got Bill, standing at his back door to the veranda of his retirement bungalow. “I left Raymarine years ago,” he explained. “But I can save you buying a whole new system if you just order the controller. It will still work with the old parts.” And he was right, so I think of him still as probably by now he walks over to feed Shergar who is tied to his rail, then relaxes with a gin and tonic sitting between Lord Lucan and Elvis Presley.

The chartplotter picked up the significant boats crossing our course, starting about 8 miles away. On the screen we see the lines where we transmit and receive AIS trancking, (Automatic Identification System).  The intersection lines it created as vectors told us if we would be in danger. As the freighters were also probably on autopilot we’d play safe and make a tiny course correction so as to go behind them. Just as well, for in the glittering haze of the flat sea that day we could not see ships before the chartplotter sprang into life and started beeping an alarm.

Later in the day after the wind got up we switched off the autopilot raised our sails and bowled along at 6 knots towards the harbour. It was still indistinguishable in the distant rocky coast, but the plotter knew best and sure enough the entrance of Leonidhion came into view. 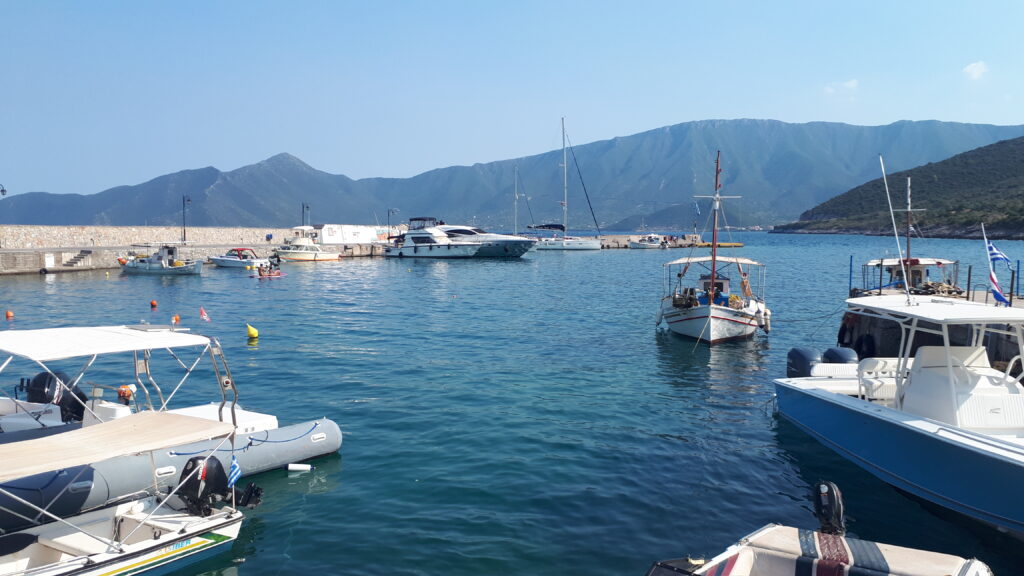