Motoring out of the long entrance of Messalonghi we passed the fishing shacks on stilts and the swimming corner at the entrance. Hundreds of wrecks lay under us from one of the largest battles in the Mediterranean between rowing galleys. In October 1571 more than  400 ships were here, and the Holy Roman Empire overcame the Ottoman advance into Europe. It is said that the difference was in the way the galley slaves were chained to their oars, for the Venetian cohort in particular allowed their rowers to jump up and become part of the fighting.

More than 15,000 christian slaves were freed from the Ottoman ships. Where, I wondered , did they get put. The scale of refugees onto this shore after the battle was even greater than the tragic flow of refugees into Greece in modern times, now numbering over a thousand a month.

“Don’t try the bridge of Rion if the wind gets up from the east”, said the next door boat as we left Messalonghi. Sure enough, as we approached Patra on a close hauled tack into the wind the white tops began to appear, coming towards us from under the bridge in the distance. The forecast was for a few days of easterlies, so we stayed in the yacht basin near the entrance. In some winds this is known as “windy corner”, though that was not true with the easterlies.

Patra is the largest city of the Peloponnese, with a wide pedestr ianised central street and many cafes. We climbed the 130 steps to the 6th century medieval castle. From the towers and turrets, we looked over the rooftops of the tight packed boxes of  housing cascading down the hill to the harbour. We explored the more arty and leafy flights of stairs downwards, where huge murals had been added to the tower blocks. We gave the roman Odeon a miss on the way as it was closed for lunch. 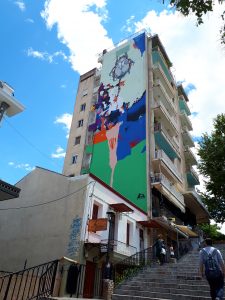 Much of the modern construction in Patra is 4 to 7 storeys high. The last chance hotel on the sea front was derelict.  Large ships were at the ferry quays, but the nearby streets were derelict and dusty with large commercial buildings that had fallen into disuse. The main square has the arched façade of the opera house, and cafes with locals. There were almost no tourists. The lunch for four of us at café Platea was 40 euros, being potatoes, spinach, garlic and a pile of prawns. A surprise was the fragrant white wine, not a rough retsina.

Taking coffee on the marble paved Riga Fereou, we were accosted by a teacher with a flock of children. They were promoting the banning of plastic bags. Bravo we say – because we carry our own bags and bottles all the time. The uk has started a charge for bags which has reduced their use, but everywhere in Greece and Italy they give you a plastic bag. The results have become very bad for the oceans, where these and other plastics have entered the food chain. 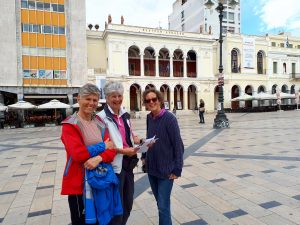 The central streets were pedestrianised and became busy with strolling Greeks as the day drew to a close. The shops boasted fashion and perfume specialists…. But close scrutiny revealed some suspect brands were on show, a bit like a market: for example suits for £150 euros by “Bertolucci”.  This is not a known Italian brand, more a handle using the name of the famous film director. No flies on my nose – I used to work in a tailors shop on Saturdays when I was a teenager.

In the uk we have seen regeneration ideas for high streets. In 2012 the government  announced plans to try to revitalise the UK’s high streets, after a report by television retail face by the name of  Mary Portas. Years later in the twelve pilot towns there is not a measurable improvement since the recession began.  The fundamentals that stop improvement in the uk are the high rentals, costly carparking and a legacy of shops that sell tat. The British streets seem to be past rescue are now full of charity shops, betting shops or cut price alcohol.  Not destinations for a pleasant walk or for people watching.

However, Riga Fereo survives, being clean and popular. As we walked back to the yacht basin we saw the same cars roaming round the blocks of dense residential streets – there was no parking available at all, for the streets were jam packed. Patra  centre is surroun 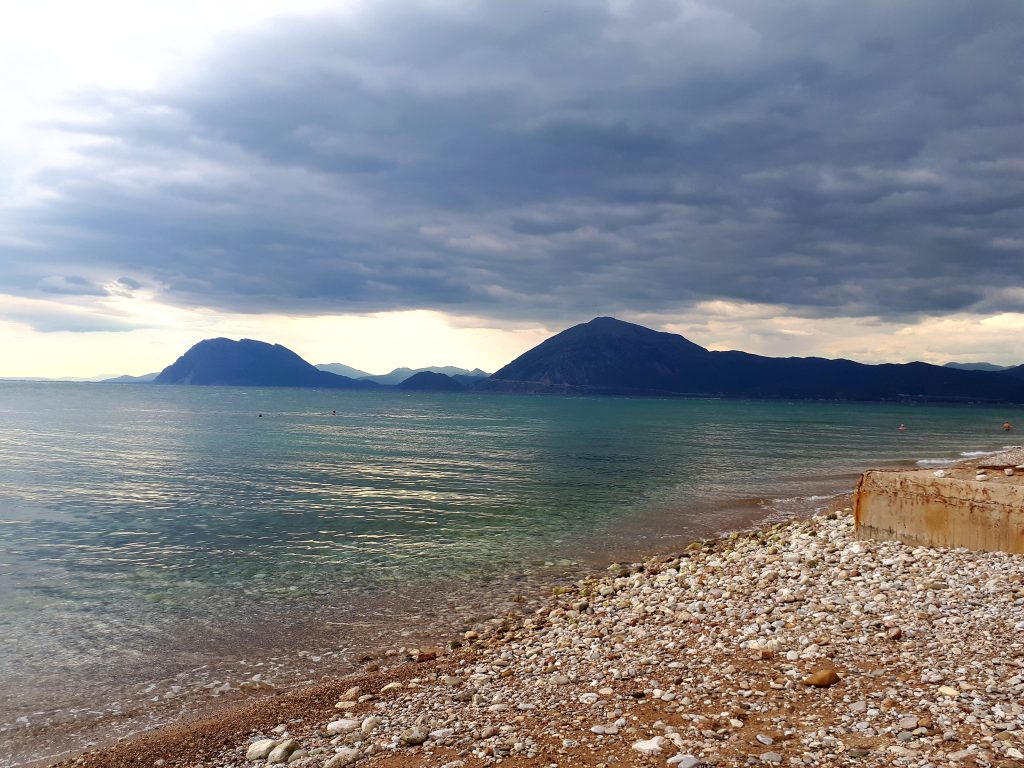 ded by 4 storey apartments and many have convenience stores under them at the corners.  They can all walk to the beach we tried out, about a mile in the direction of the bridge. No locals were to be seen on our visits, for many Greeks don’t swim until the water is warmer later in May.

After a few days the forecast change in the wind direction came true, dead on time at midday. We set out for the bridge a passage of 23 miles passage to Trizonia Island.