From Riposto we motored for half a day with the main up southwards with a light following wind. The swell had died and we skirted the yellow buoys of the nature marine reserve outside.

Lost in translation , as we say, 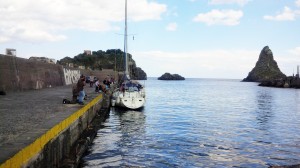 was the following note in the pilot. We had read that it is possible to anchor bows out in the harbour – no such thing is sensible    because that would partly block the entrance. ( the deep water quay was full of fishing boats ).  We went alongside the only empty quay, and at 4am a large fishing boat motored into the next space. We had to fend off and move a couple of metres.  By daylight we noticed the other fishing boats were adding extra lines from bow to bow. As forecast,  a ferocious wind came in from Etna, sweeping round with an intensity which was increased by the venturi effect. We knew it would be a high wind to the west of Sicily, but this was the sheltered side, where it came in as  a force 8 gale. It swept from the north, short lulls, then the south, then back again. A few hundred metres away at the harbour entrance the spume  swept upwards in furious sprays. Each time the direction changed, the breaking short waves built up again in less than half an hour. We watched a southbound yacht punching into them outside, being thrown up like a cork, moving at less than walking pace as it motored.

The wind in the harbour tilted us against a ledge on the harbour wall. The fenders wriggled up, and in spite of the 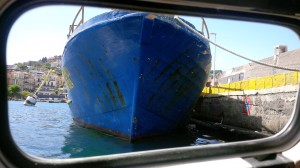 fishermen trying to help to push us outwards we suffered long deep scratches.

Aci Castello was on a national holiday, we mingled with the crowds and promenaded along the one main street by the quays. April 25th marks the fall of Mussolini’s Italian Social Republic in 1945.  People were swimming, eating, and chatting in groups. A man on a bike told us which cafe had the best coffee: the Gran Cafe Solaire. Church was pretty, being re-built after earthquake damage in a cut down Baroque style. the rest of the town was mostly modern two storey development, yet a fine quay swept down in terraces t 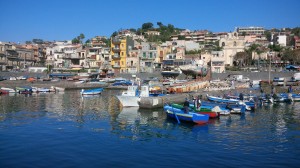 (This is the flower of the partisan  … who died for freedom)

On April 25, this is sung again throughout Italy, played on the radio or performed by bands in parades. Set to the melody of a traditional folk song, “Bella Ciao”, it was the anthem of the Italian resistance movement during World War II.

We had a long slow lunch that same day to celebrate our 28th wedding anniversary at Cafe del Mar. It was under the white shades, by the sea with views of the strange vertical natural rock sculptures. ” Those are volcanic plugs,” said Sarah. (and she should know having her geography degree) . The food was excellent and the terraces were packed with Italians of all ages. Suited men, and women in dresses, including Sarah in her whites, drank Aperol spritz with lots of appetizers upon which to graze first. This is a new catering format for Sicily – being a “bar” but with a menu and wine list worthy of a “ristorante”. It was a good way to unwind after the problems where we were tied up. The atmosphere was happy, and we did not see anyone drunk. As in Palermo, the good natured teenagers were out in large numbers but not carrying drinks in the way the Brits do.

The next day, by Solaire, we met Eduardo at coffee, after he helped us to get served. He chatted for an hour about Italian employment and politics. “The government here is right wing, though they used to be communists…. they just give work to their friends.” He told us that although Pellegrino is an Italian company, it makes drinks out of Moroccan oranges. That there is  much fake Italian olive oil, and yet it’s not even Spanish any more. “Again, it is coming from North Africa.” 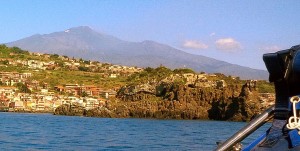 e town, on a plot with enough land to grow his own fruit. He was moustachioed, smartly dressed in a white shirt and brown jacket, and talked about his imminent retirement after a life in the holiday promotion business. “People down south, near Ragusa, they work the hardest – they get up early, and the economy is all about agriculture, “ he said. “ Not all regions of Sicily are the same, and anyway, we are completely different from mainland Italy.”

The next day we motored for half a day in calm conditions to Catania, leaving Etna a safer distance in the sun.