Anchored in about 5m in the south bays of Kira PanaIya at various times we hid behind the inner bay island . Or at other times we lay more open in a curved area surrounded by soft hills. We got to recognise one of the goats, we named the lion cub. A fluffy younger golden chap. No bells here, for these are a wild bunch, though they are managed on behalf of the monastery. They came down the tracks to the shore, and we climbed up their tracks from the small beach, over the low brow and spied out the lie of the land around my pirate tower. 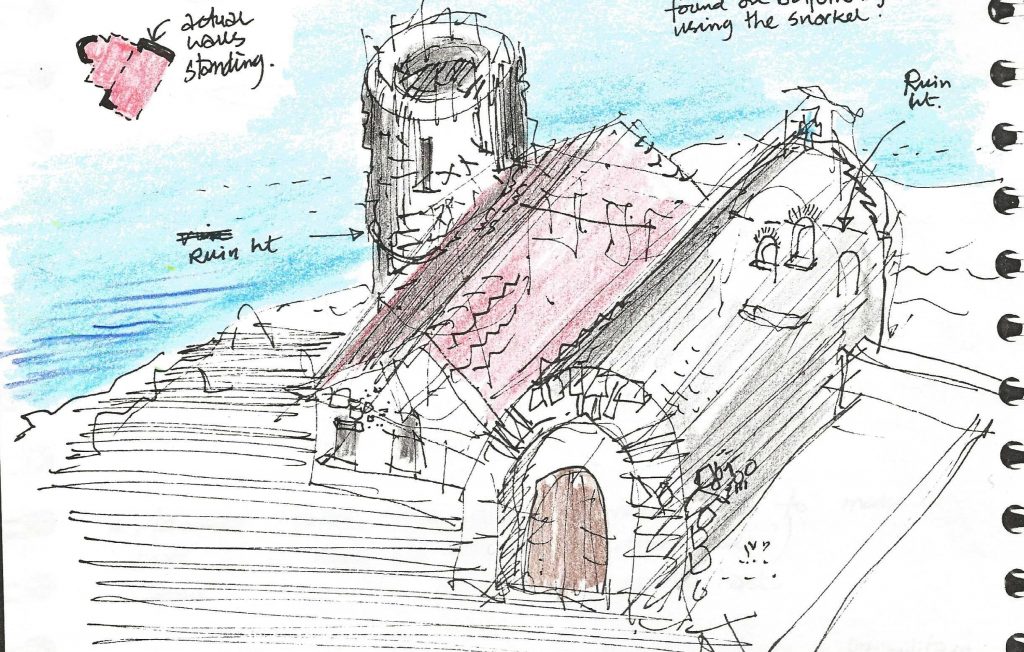 On a previous trip I had climbed through the scratchy undergrowth to the southern tip,  suspecting that pirates would look out from there. Sure enough I found the remains of a tower – and after drawing it I re-constructed how it might have looked. That tower is of course the watch outpost of Byzantine times, built to keep pirates away. Shards of pottery are strewn down the slopes, and sure enough Louisa and I have found bigger pieces on the bottom. ( Always returned to the same place). So we became a sailing time team. Just as the stones of the ruins suggest the full building, so does the part of a shard suggest the pot from which it came. Sn 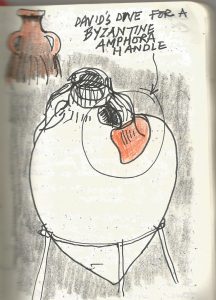 orkelling among the small fish soon revealed the pottery pieces, for they are still a tangerine colour against the grey. Our holiday name for Louisa is Amphora, because she did a lot about pots during  her classics studies at Kings College.

The wind is known to gust from the West, and one night we did drag sideways. We were tied stern to the shore. But moving to the east side we had the boat at a better angle into the wind from then on. Well stocked with water and food we swam, walked and for breakfast ate our nectarines, apples and bananas,  laced with honey and yoghurt. The best jars we saved from the pinewoods of Skopelos – and have taken a lot home to Bristol.  Each night the carpet of bright stars were twinkling, and the milky way was easy to see.

Parrot reflected on a boat load of people we had seen setting out from Orei to a yoga retreat.   , “What is all this going to do for them? Won’t the  eyewatering cost of going there give them asthma as they gasp at their credit card balance? … and they will have to  listen  to somebody telling them to calm down…. “  Spending days in these peaceful bays  is very calming – and will save me the trouble of downloading a mindfulness app…. I made a list of the pleasures:

Mental Clarity — Calm through mental focus and meditation. Er..shall I go swimming or watch the goats?

Physical Wellness — The practice of static postures, stretching, and breathing. Er… yes I will go swimming, not just paddling, powering along like an outboard engine.

Emotional Serenity — Unlocking the secrets to accepting the now versus the future or past. Er…. Not doing a lot – perhaps stargazing counts.

Inner Peace — By stopping the mind you remove inner-conflict.  Er… a couple of beers at lunch time seems to do this.

Greater Vitality — Circulation is achieved through deep breathing and physical movement .  Er… panting up the hills does it absolutely fine. ( smells nice to be among the herbs of thyme and sage.)

Count how many units of alcohol – is being consumed each day per person on this boat ?  …. Mmm, I forgot, that’s a different app.

There is only one building on the island, the monastery. The morning came when we tacked out round the southern shore and beat into the north east wind, on passage for   the tiny bay below the buildings. Two flags fly on the promontory, being the crossed eagles of the church, and the blue stripes of Greece.

We expected to find the Bishop at the feast day, and as promised by monk Hariton on our last visit, all  would  be welcome at this event . Some dozen boats were tied to his quay, and we anchored in 8m with a stern line in case any more yachts came in.

Up the 50 cut steps then the track, we saw wild sage which we picked. In the monastery courtyard the Bishop was chanting prayers and food was being prepared for a hundred or more . At the top of a rocky cliff, by the flags flapping furiously in the increasing northerly wind, Sarah and Mary spotted the Eleanora Falcons again, this time from above. 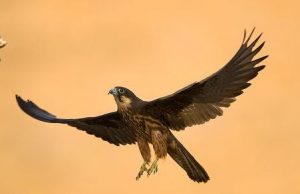 Sarah has seen one doing aerobatics earlier, even higher up, pretending to spiral down in a spin out of control. Quite a rare perspective on this day allowed us to watch them more closely. They were surprisingly small, brownish,  and quite plump. Unlike seagulls they did not soar with flapping their wings, because they rode on the uplift of the wind hitting the cliff. This falcon eats other birds in late summer. They are caught in the air, while hunting usually taking place over the sea. A number of falcons may hover, forming a ‘barrier’ to intercept passing prey. Holy mackerel said Parrot, I don’t want to be lunch for them, take me back to the yacht.

Around us in the rocks were small purple cyclamen – wild and magical to see so much of it hiding in dark corners of the rocks like little dashes of paint.

Only one yacht was beating north in the sea which was now showing increasing amounts of white tops.

Some thoughts have been shared with us about religion, and therefore religious buildings not being of interest. For us, this island is very  special because it is a wild nature reserve. PeRhaps partly because it  has been in the same religious order for over 1,000 years. It says something about the power of faith.  There, as a modern showing of that faith, is a gathering of a crowd of people in the lovingly restored monastery.  Not that we understood anything that the Bishop was intoning, but generally the Byzantine Chant forms the readings in the Greek orthodox church. Well, here we were, only the previous day handling the Byzantine pottery in south bay….

After swimming in this bay, warm and clear,  we   lunched  using  the wild sage, fried in butter and  garlic  with pasta. We reefed the main in order to beat up the channel to the north bay. The way in is a  small entrance . It is 200m wide, exposed to the prevailing wind, yet opens out then into wide bays enclosed by low lying slopes clad in evergreens, the maquis. Goats skittered about on every side. At nightfall the fishermen 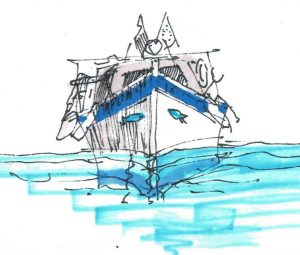 brought their boats into one of the beaches and partied near their small hut. There were lights and a lot of drunken noise. We have heard that they often do this, leaving in time for fishing at dawn.

More than a dozen yachts anchored here, in 5m, swinging free. There were not a lot of swimmers for a couple of reasons…. Enormous jellyfish that were bigger than footballs drifted  past us.  In Greece, they call  the rather fleshy jelly fish medussas . The sting is not too bad.  But from the much more unpleasant tsuhtres we had many marks. The  lacerations stung us on our arms .  These are the thin, often invisible strands. Invisible. How scary is that?

However the big ones are easy to avoid yes? Not in North bay, for the sea is cloudy !

No, says a Dr Peter Richardson. He insists that urine doesn’t help a jellyfish sting. He is very clear on the issue: “Peeing on a jellyfish sting is not advised.” The Scientific American journal busted this myth back in 2007. It warned that urine, on occasion, can even cause the sting to burn more, not less. More importantly says Parrot, it’s not something we’d like to see on the beach is it?.

Our tour of the Sporades was almost at an end as we left North bay for some westward passages to the ports of Skopelos and Skiathos. A brilliant wind. Allowing whole days of fast sailing sometimes reaching with the chute up  on the starboard tack. 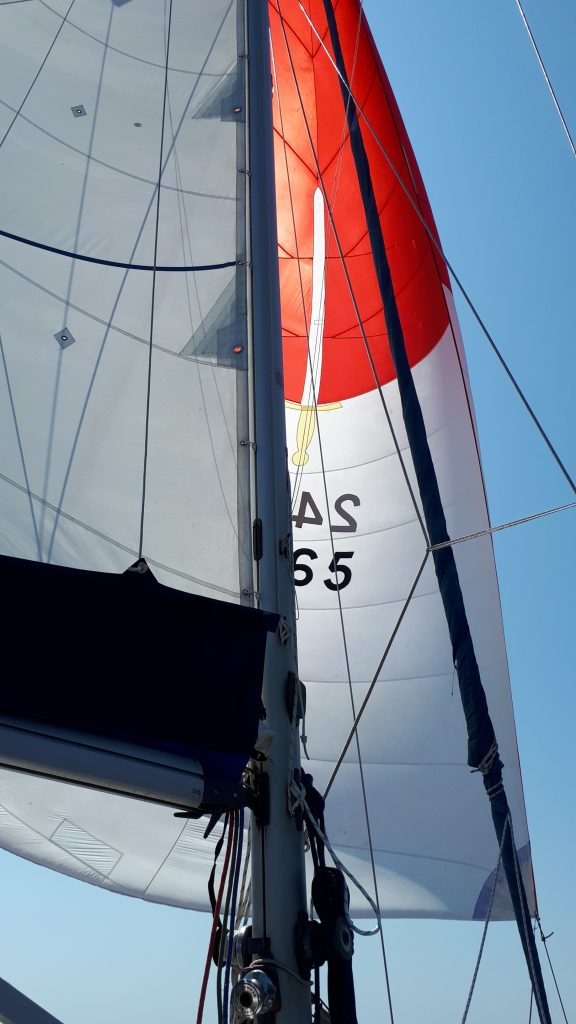