Soon after sunrise we weighed anchor and motored eastwards in the remainder of the swell left over from the squalls.  We had some an 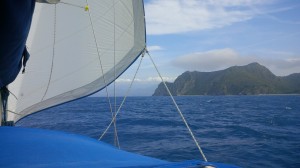 xiety about such high windsappearing yesterday when they were not forecast. The moderate swell continued from the north west, pushing us round Capo Calava. As usual at capes, the wind picked up and we sailed with only the Genoa at 6 knots. We dislike  having the main up in light following winds because the sail bangs from side to side in the swell. The unknowns of the next few capes also made us cautious, wary of suddenly having to drop the mainsail in unexpected squalls with big swells. The controls for Shearwater are all at the mast, not brought back to the safety of the cockpit, as in the modern way.

We discussed our next stop, which could be Marina Potorosa, (at very high prices of over 80 euros). There were no other yachts out sailing and we could see the masts in the distance tucked safely inside it.  As we rounded the spit of the sandbank which juts out at Tindari we altered course  inshore just for a quick look. The change was surprising. Leaving the rolling swells, we had entered a calm bay, open to the northeast but not affected at all by the sea we had just experienced.

Anchoring outside the fishing boats was a test of our long chain, in a depth of  15m. So we let out all 60m down into the clear blue water as the sun set in a hazy sky. The shore lights twinkled in the far distance, but none on the nearby deserted beach.  We liked it so much here that we stayed two nights, being well stocked with our own vegetables, pasta and water. Just as well, for here there is no quay, nor shops nor cafe. Tindari is a holiday village, and out of season has closed bars and empty chalets.  Racks of dusty windsurfers and pedalos waited for full summer along the beach. One group of homes up a gated drive was also empty, for the season had not started. Dust blew along the small lanes and clumps of dried  weed was rolling towards me. 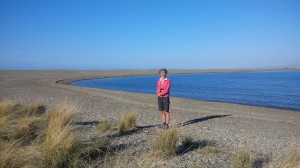 sand spit had a few walkers, like us, exploring the strange sensation of the surfing waves on the outer side and the glassy flat sea in the bay. A few couples were being amorous in the daytime and teenagers appeared in the evening in larger groups.  Tufts of Marram grass bent in the wind. Here and there were bones, logs and flat dead jellyfish. Sarah searched for the migrating birds which were listed on the information signs near the path. She only spotted swifts, pigeons and a blackbird.  The bank is a marine nature reserve, with salty pools under the cliffs, and we had obeyed the instructions to anchor outside the yellow buoys.

Indolence set in, and we did not climb the two hour cliff trail journey to the modern kitsch temple of the 1960’s. It is dedicated to the Madonna Nera – which is a complex story that I did not really understand. The buildings looked like a large hotel.  With the internet, we looked at photographs of  the 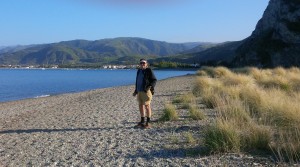 nearby Roman ruins dating from  400 bc when this was an outpost of Siracusa.  We remained indolent, and Sarah swam in the cold still sea. Fishermen   waved,  going past in smaller boats with outboards, and we enjoyed being in just one place.  As evening arrived again a large moon appeared near the horizon. A portent of the spring tide that would take us down the Straits of Messina. Perhaps the Romans sat up there watching an evening such as this. Or listened to Virgil’s version of another sunset as the Greek fleet left their wooden horse on the beach and waited hiding behind an island outside Troy: “the sky turns to the west and night rushes up from the ocean, wrapping in its mighty shade earth and heaven”.