Our very special first two weeks really was sailing… not like previous trips here, when this yacht was being a motor boat most days. This trip we sail slow or fast, or wait or tack. It is the kind of  holiday this year when we don’t have to be somewhere on time.

So we sailed into the bay at the mouth of Volos to anchor by Achilles tower. Strong winds swirled us around at night, as we looked up at the square floodlit stump. Achilles, son of Thetis was expected to have a long uneventful life, or to have a shorter brave life of a hero. His mother dipped him in the river Styx, to make him invincible – but held on to him by the heel. Leaving his one vulnerability. She then hid him dressed as a girl among a family of sisters, but Odysseus found him. ( Knowing that Achilles was vital to winning the Trojan war, ongoing by then for 9 years . Achilles did slay Hector ). Odysseus visited the family where Achilles was hiding, and blew the emergency attack conch. The girls ran for their clothes, but Achilles ran for the weapons – and was then unmasked.

These legends are so exciting and I can still remember lines from Virgils sack of Troy .Even though I hated Latin.

We sailed out at 6 knots under half a genoa in a strong wind ( 30kts )  close hauled in moderately rough white topped sea. Only a few waves breaking over us. I remembered that the invading Persian fleet came down these straits 2,500 years ago,  watched from the shore by the Athenians as they prayed for a storm. The October weather pattern  of frequent storms helped… for the Persians rafted up in a gale,  and many galleys were broken up smashing onto each other.

A  night spent in more high winds at Andreamous bay was enough to keep us up a while, but we did not drag in 34 knots of wind. A yacht that anchored too near us had to fend off as they left. 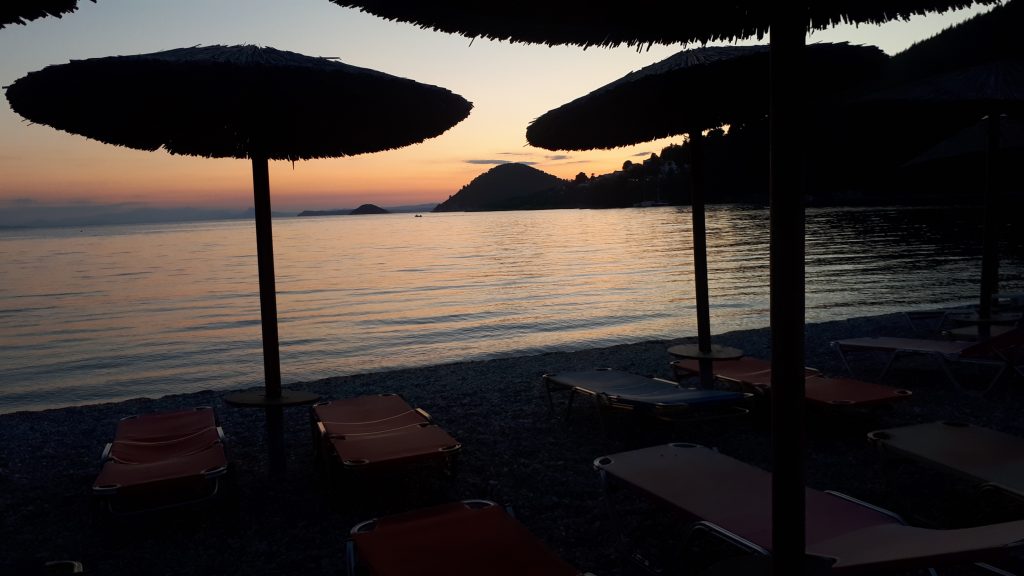 Sailing in bright sea for an afternoon to Panormous bay on Skopelos reminded us about some of the great pleasures in doing these trips, and why we don’t feel the urge to explore new places when these bays are so beautiful.   It is the greenest bay on the greenest island in the Mediterranean, they say. Fragrant pinewoods tumble down to the low fringe of pale grey rocks, where our shore lines are tied. The pines are of different shapes and colours. Some reach for the blue sky, and some reach out towards us in bubble shaped clouds of green. Colours range from almost yellow to dark green. The trunks are strangely black. 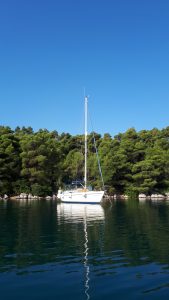 Michael Carrol built a house here and wrote  in the 1960’s about the families he met in “An Island in Greece.” Near his low building, which perches on a large rock, he found some temple remains. We have seen the word temple on a map, and  searched unsuccessfully for it on previous visits, being hidden in a grove of cypress, olives and fruit trees by the shore. The reality was that he only found a column and three byzantine capitals. Like much of Greece, we were surrounded by an invisible classical city, now disappeared except for a few walls among the trees.

Waking up in Panormous on  windless mornings revealed the forest reflected in the magical sea. We floated on gently flowing silk. Some nights were stormy but the wind is predictable, building up the waves from the entrance in the north. Two other yachts dragged – but we were hooked inadvertently onto a sunken metal dinghy.  Some anxiety when we departed, for it would not let us go till we yanked our yellow buoy line which was tied to the hook end. Up it tripped.

We sailed  on one tack in an afternoon to Skiathos port and anchored in the bay outside to the west. Linda our guest from London arrived on time  at the sunset bar. We waved at her plane coming in , for they approach  very low in order to make the short runway. We can practically see the passengers in the portholes.

Sail, swim and eat became a our habit along these islands which is a pattern of holiday indolence that we were pleased to share with her. And we liked her cooking too . We sailed on a fair wind to Alonnisos.  On the way, we saw a swordfish jumping like a  spear of silver splashes. Then a dolphin dived under our bows.  . Who was chasing who?  We saw many Painted Lady butterflies on their way up from Africa 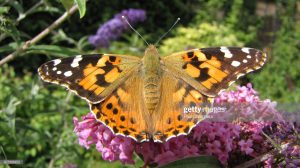 Arriving at Ormos milia we shared the quiet anchorage with a few other yachts and ate small anchovies whole at the one beach Taverna, “Parathin” . Ordering too much, we took the rest on board in a box for next day. At the next table,   Michele, an attorney from Paris explained what he was up to. “Sorry for the noisy party here last night. We had 40 friends here for my wifes’s birthday “ . With a twinkle in his eye he explained that he was “not quite retired “. A stocky chap,  busy on his laptop and busy darting over to his remaining guests, he had the  endearing shrugs and arm waving of a stand up comedian. “ I once had to explain if French people spoke the same dialect as the English…” he got me confused.  And invited us to stay with them in Paris by email later that day. Michele needs to tell me if Parisians  think Boris Johnson is a bigger comedian than was Francois Hollande, or Silvio Berluscione.  I don’t think we could muster 40 friends to a remote island by plane and ferry and car.

Next to us anchored a large  sunseeker, rather close, ( which the Italians sometimes do, we have noticed ) with one line to the shore. The wind got up from the bay entrance but all was ok for another night. We swung into the slight swell on a long chain in about 7 m depth. No streetlights, just the stars and the milky way. 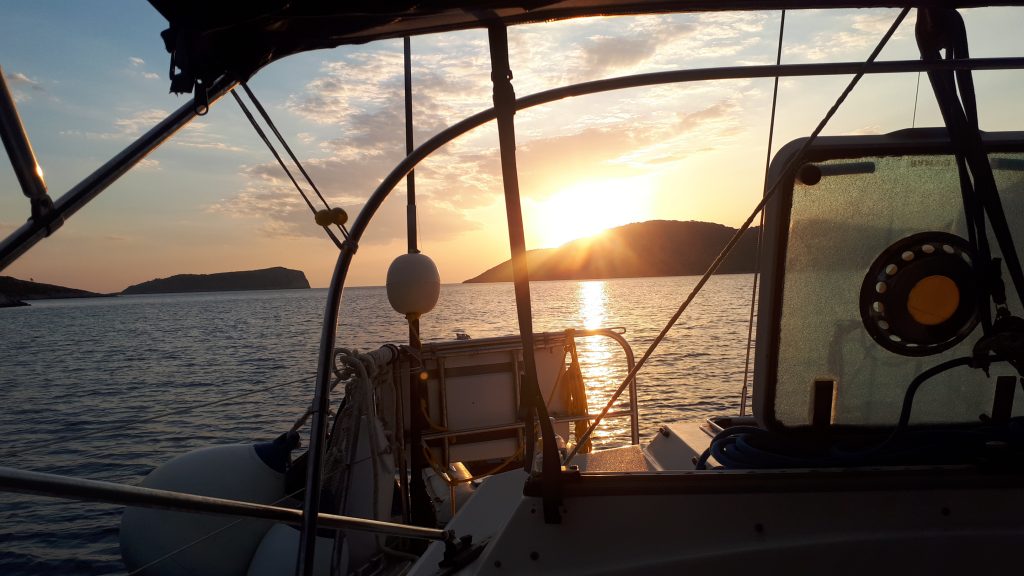 The wind not only straightened out our loop of chain the next morning, for it flew the large red, white, green Italian flag out square and true. It was so clean and bright, it must have been ironed. The Sunseeker was the same model as was driven very fast by a woman on the Thames for a James Bond chase. The Italians set off in theirs very slowly. The big engines boomed like treacly gravel in my ears.

Linda from London was on her phone reading about the choice of Boris Johnson as the new UK prime minister. “ I am ashamed to be British ,” she said. “We are going to have a recession…”

I put my new clean large red British ensign up ready for our visit to Skopelos Port. 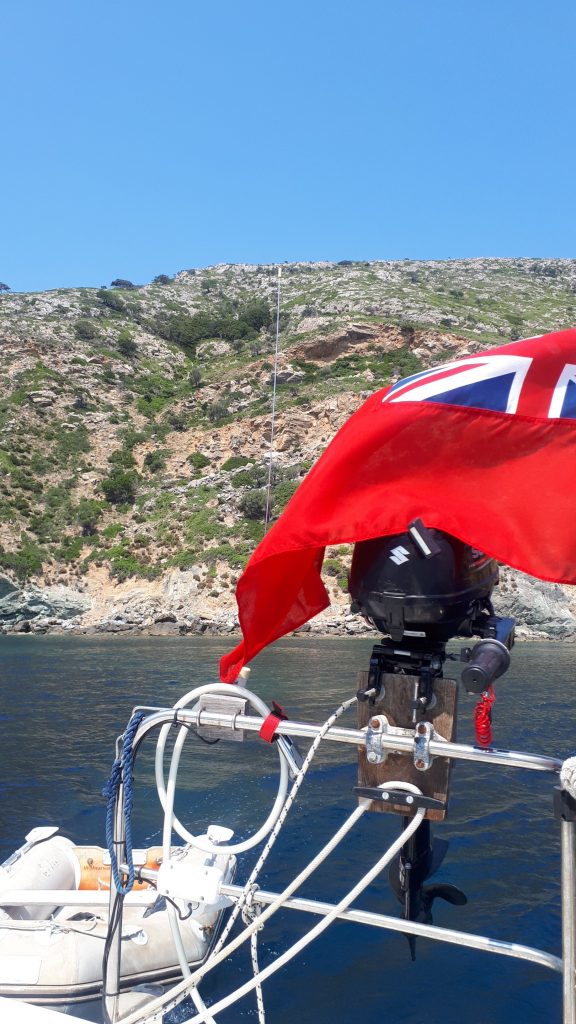